First the tantrum, then the fall 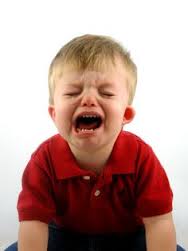 The rotten news just flashes by too quickly these days. Who can process it all properly? Who can stamp it with the impact it deserves — or doesn’t?

This of course works to our president-elect’s favor. Like the 2-year-old barrelling around the house knocking semi-precious stuff off tables and onto floors, Trump is recklessly having his way with whatever is in reach of those baby hands. After seven decades of 2-year-olding, he’s damn good at it.

He needs a good spanking of course, but like all these rich, spoiled brats we’ve come across is instead given high reward for low behavior. Nothing can be done. The high chair is just too high.

All the Russia hacking stuff is tinged with espionage, traitors, deceit, ill-gotten riches and most likely a whole lot more. But what it mostly is, is the tot being teased and made fun of by the precocious 8-year-old.

The 2-year-old’s piggy bank is stuffed tight with dollars and rubles made in the dark with the 8-year-old, Putin. Birds of feather. They’ve been knocking stuff off tables together for some time now. Hillary pointed at it during the election, and the 2-year-old hollered back, “Lock her up!”

So now it’s all coming to light, what Hillary said — that, and shootings at airports, atrocities in Syria, Brexiting Brits, war in Chicago, women’s rights set aflame …

Nobody can keep up with it all.

When confronted with all the light and Intelligence, Trump lashed and spit like an ignorant dummy. His babysitters, Ryan and McConnell, smirked and defended. He might be a 2-year-old, they mused, but our people love him, so we will, too – for now.

Finally, they’ll say, “Grow up already. Isn’t it time you stopped acting like a 2-year-old?!  Nobody feels sorry for you!”

Like that, the screaming will stop. The 2-year-old will sniffle some more, rub his cuffed sleeve across his snotty nose and stumble back to his little feet. “Fine,” he’ll bellow. “Let somebody else run this stupid country!”

Then he’ll stumble off to the next table.

With his campaign faltering miserably, Trump held a meeting Sunday in his bunker aimed at altering the dynamics of the race …

For decades, white people have kicked, screamed, beaten, burned, lynched and conducted themselves in myriad horrific ways before grudgingly “giving” black people what was rightfully already theirs.