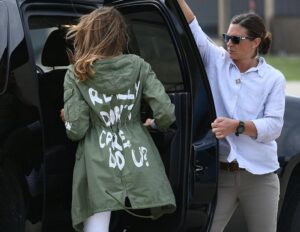 Details have emerged of the top-secret plan to adorn Melania Trump in the infamous green jacket. (See the exclusive, could-be-true accompanying interview.)

EDITOR’S NOTE: What follows is the transcript from audio that might have been obtained this morning from a Wednesday night get-together in the White House’s Terrifically Golden Dining Room where President Donald J. Trump was dining with his wife, Melania. Before you allege this a lie or made up, ask yourself the last time you heard the truth from the White House. Enjoy.

Donald Trump: I’ll have the 32-ounce sirloin burger with extra cheese — American — and ketchup, plenty of ketchup as always. Oh, and the curly fries and a bucket of strawberry milkshake.

Melania Trump: I have what he’s having except for burger, fry and milkshake.

Trump: Hey, how’s what’s his name doing … ya know, the little, quiet one?

Trump: The kids I put in the cages are driving me crazy.  So bad. So misbehaved. I knew I should have listened to Miller and just fucking … <inaudible>

Melania: Why Stephen standing in corner?

Trump: That’s a good boy, but knock it off with der Fuhrer business, eh? It scares Melania.

Trump: Well, dieting is probably a good idea. Put on a few pounds while you were laid up getting that boob job done. And they look incredible, I mean sensational, by the way. But you’ll look a lot better when you take off a few pounds down there. Now pass me the ketchup.

Trump: Stephen thinks I need to send you down to the concentration camps tomorrow for a look. He thinks public opinion is getting away from us on this one. Says only 75 percent of America agrees caging these awful, disgusting children is a good idea. Need to get that number up a bit. I concur.

Trump: Anyway, Kellyanne will be in charge of your wardrobe tomorrow. We have quite a surprise for you. Pass me the basket of fries, will ya?

Trump: Ohhhhh … yeah him. Stephen could watch him. They could play cowboys and disgusting Indians or something.

Melania: Not good idea. I have Sarah watch.

Trump: Fine, they can watch CNN together and do those funny barf signs and make those awful faces Sarah does all the time.  Pass the ketchup.

Melania: Those not awful faces. Sarah just look that way when smile.

Trump: Yeah, I’ve tried to talk her into having work done on her face. I guess Mike tried for years, but no dice. Boy, she’s got his gut I’ll tell ya. Whoa. Butler? I’ll have another bucket of milkshake. Thank you.

Trump:  So, we figure you’ll leave around 10 tomorrow for the camps. You’ll need to brush up a little on the English. Don’t need you speaking worse than them do, know what I mean? It’s very hard on me when you talk so bad like that.

Trump: You won’t need to say much. Just stick your chest out and look concerned. We didn’t pay to get those boobs done just for my delight, ya know. Ketchup?!

Melania: How long be down there?

Trump: I dunno. Hour or two? Depends on how many people you’ll have to avoid. They’re making a big deal out of this. The lying, fake, stupid, awful, corrupt, disgusting, goddam-fucking media is blowing this up out of nothing. NOTH-ING GODDAMIT!!!!

Trump: I try to close the borders down and eliminate these awful creatures and this is the thanks I get.

Miller: Maybe not use the word, eliminate, Fuhrer. Enlist will play better in the press.

Melania: Have you seen how she dress???

Trump: I generally avoid looking at her. She’s not my type as you know. The other blonde has done well this week, though.

Trump: Yeah, I think that’s her name. Boy, she can dress up a high heel for an old broad — if you know what I mean.

Trump: It’ll be OK, believe me.

Melania: You eat too fast.

Miller: Der Fuhrer needs to keep his strength up.

Trump: One good thing about how unfair everybody has been to me on this issue is that it is keeping the goddam, awful, corrupt, mean, terrible, terrifically sad, fake media from talking about Rusher.

Miller: You are learning, Fuhrer.

Melania: Does he really have to be here?

Trump: Kid’s a damn genius. Scary looking fucker, but put a bag on his head and he’s like the son I never had.

Trump: OK, Hannity’ll be on in a minute. Butler? I’ll take my ice cream in the Golden Study. Did you get Hannity tonight’s script, Stephen?

Melania: I watch Hannity with you.

Trump: I really don’t care, do you?

Melania: Umm, got idea. Be right back.

Trump: What the hell was that?! 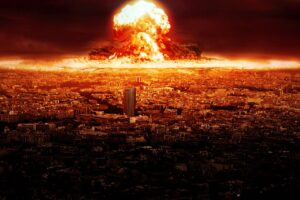 Before heading to the golf course Sunday, Donald Trump wrote[...]