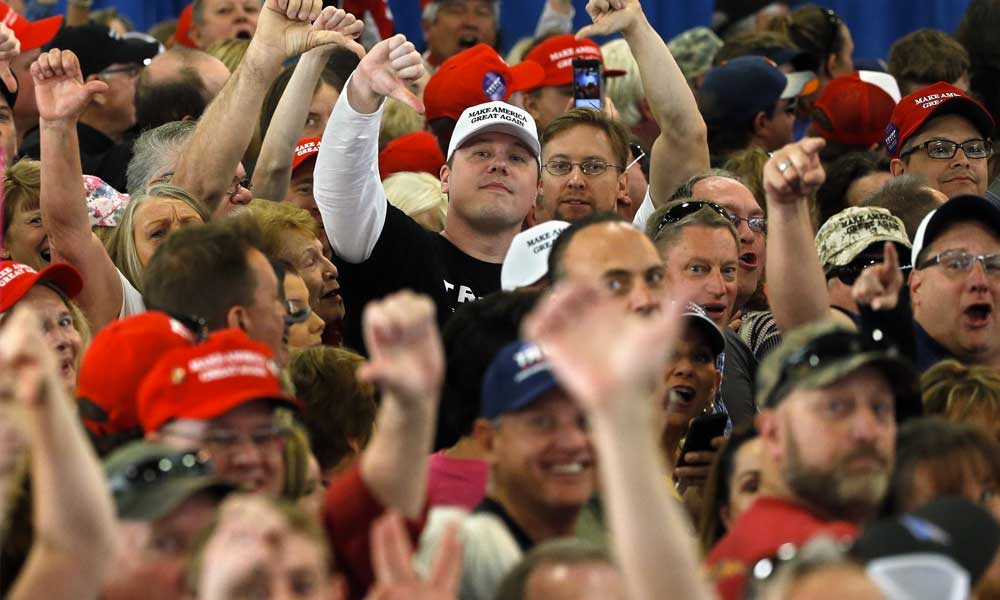 (EDITOR’S NOTE: As we close in on the 2020 Elections which are now a mere 20 or 30 months out we will be combing the countryside to bring you an up-close look at what real, God-fearing American swing voters are thinking.

Today the view from Wisconsin, where Midwestern values are prominently etched in both the contours of the rolling farmlands and in the way these salt-of-the-earth folks carry themselves literally every hour of every day.)

BARABOO, Wisconsin — Gordie Hefekker slaps a meaty hand on the bar and orders two more “ice-colds,” as I fumble for my pen and notebook.

Hefekker is one of the coveted voters who make up the Midwest’s “Rust Belt,” an area which thanks to an antiquated Electoral College will be key in selecting our nation’s presidents for the next 60-to-100 years or so. Was a time the Rust Belt was pretty solidly Democratic, but lately has slowly drifted to the Right.

Hefekker, 49, and a professional “jack of all trades” fancies himself an independent but nonetheless voted Republican in every presidential election until 2008 when he “gambled on Obama.” Not done with his wild, misbehaving ways, he acquiesced and laid another bet down on Obama in 2012, before going Trump “just for the hell of it” in 2016.

“I figured after eight years of peace and quiet, I’d give a white guy with big ideas a chance to get our voice back in the room,” he says. “Besides, as you well know, Hillary just couldn’t be trusted.”

Hefekker positively bursts Midwestern charm as he drains his Leinenkugel Gold and goes on about luring “stupid chipmunks” with cheese to a dark, empty shed toward the back of his property, and then drowning them in old paint cans full of gasoline to keep the critters from infiltrating his 4,200-sq.-ft. Bob’s Big Boys tomato garden. “Sure, they’re cute,” he says through a beefy snicker, “But they’ll eat you out of house and home, those little sons of bitches.”

Hefekker and his family have lived in Baraboo their entire lives. The town is home to approximately 12,000 residents and is 30 miles north of Madison, the state’s capital, and home to tens of thousands of “misguided, pansy-ass, granola-snorting Lefties,” as Hefekker delicately puts it.

“Damn Lefty know-it-alls,” he says charmingly. “That’s the problem with those university towns. They think they know everything, but I guarantee you they don’t know how to eradicate chipmunks from a tomato garden.”

Gordie says the Hefekkers came over to the States from Southwestern Germany in the 1870s to escape the “cloudy/cold” only to quickly discover the true meaning of  “bitter irony” after the first winter in their new land.

Even so, they haven’t moved from the place since.

“Sure it gets cold as hell up here, and the mosquitoes are the size of school buses in the summer, but you get used to it,” he says. “Besides, nothing like filling up a garbage can or two full of beer and sitting on a lake ice-fishing with the boys all day.”

We’re drinking beer at Elmer Sawbucks, a ratty, homey local dive, that’s been serving “ice-colds” to the locals for as long as anyone can remember. I’m starting to get positively blitzed as Bart, the bartender, piles up ice-cold “Leinies” one after another in front of us.

Bart tells us there’s nothing more Wisconsin than pounding Leinies, talking Packers and daring his customers to drive home after 19 beers.

“Sure, you-betcha, we get the occasional wreck, but generally nobody gets hurt enough that they can’t get back to drinking beer pretty quickly,” he says proudly.

Before blacking out, I am eager to discuss politics and what a thoughtful, Midwestern swing voter like Hefekker is looking for in 2020.

So I click on my recorder and dump my pen in one of the eight empty Lienies glasses in front of me.

“Damn near anybody or anything but a coastal elite, or Hillary,” he belches. “We Midwesterners are tired of coastal elites and Hillary telling us how we should think and act.”

I remind him politely Trump is from New York City, and seems the definition of coastal elite, but Gordie says that’s different. “Trump doesn’t like New York City, you can tell,” Hefekker says through a six-second burp. “He likes us, though. Tells us that all the time when he comes to visit and holds his rallies. He says nobody in New York City likes us. Hell, he lives there so he’d know.”

I decide to avoid the obvious follow-up and ask him instead about the Coastal Elites in Texas, Louisiana, Alabama, Mississippi, Florida, Georgia, South Carolina and North Carolina who voted Trump. He lets out a long, “Noooooooooooo …”

“That’s the south,” my friend. “We all know they aren’t elite down there. What’s wrong with you? They are clearly below-average people but I’ll say this, they are solid, true-blue Americans and that’s good enough for me.”

“Even though they are on the coast?” I ask.

“I see what yer doin’ — you-betcha I do,” Hefekker groans. “That’s why people don’t like the fake media.”

Starting to see double, I push on while Gordie orders a couple shots of Jack “to really get things going.”

I tell him I’m not interested and within 11 seconds of barfing all over the bar, but he’ll have none of it.

“Don’t go acting like a coastal elite now. Man up. We’re just trying to be Midwestern nice and friendly, so don’t be an asshole, got it?”

As Hefekker belches again, I ask if he’ll vote for Trump this time around.

“All things being equal, you betcha,” he says.

I ask him why — given his premium on Midwestern values — he could support somebody as wildly rude and dishonest as Trump.

“Because I might not like what he says all the time, but he just keeps saying it anyway, so he must believe it and I like a man who believes what he says even if I’m not sure I believe it entirely.”

I stare at Hefekker through one eye, drain my shot of Jack and order another.

“Attaboy!” screams Bart, and he promptly pours me and Gordie two more shots, two more Leinies and puts two pretzels the size of catcher’s mitts on the bar.

I ask Hefekker if it doesn’t bother him that it is documented Trump lies on average 13 times a day. I said that couldn’t possibly be one of those Midwestern values we hear about all the time.

He knocks back the shot, belches and stares at me hard. “You’d be surprised what Midwesterners can condone in the name of America, sonny.”

Fearing for my life, I decide it best not to press the point even though I am quite certain that before the evening is over I will be dead of alcohol poisoning, anyway.

I ask him if there is any chance he would consider voting for a Democrat in 2020.

“You betcha,” he says, “as long as it is the right person and they love America.”

I tell him that Klobuchar might be worth a look.

“What’s a Klobuchar,” he asks.

“Klobuchar, Senator Amy Klobuchar from Minnesota. “She talks about Midwestern values all the time!”

“Minnesota?! Minnesota?!?! Bart, you hear that?! This guy’s talking about somebody running for president from Minnesota!!!”

Bart starts howling, grabs the bottle of Jack and pours three more shots and drains one  himself. “Those folks from Minnesota are dumber than a moose without a GPS!”

I have literally no idea what that means, but Hefekker is positively roaring now.

“A woman president? From Minnesota???? Hahahahaha! Ho-ly-shit. What’s next?! A black, coastal elite, woman from California?!?!”

Bart is now on the floor doubled over in laughter.

“He’s a Republican from Wisconsin, wiseguy,” Bart says picking himself up off the floor.

“Bullshit. Now yer just messing with us and taking advantage of our Midwestern trustworthiness and innocence, “Hefekker says.

“OK, what about Mayor Pete, an Indiana guy?”

Gordie and Bart are both staring at the ceiling tapping their feet.

While Gordie quietly snickers, Bart finally says something about “Mayor Pete not being the right fit for America” and shuffles off …

Now seeing three of everything, I decide I’ve heard about enough and ask Bart for the tab. I also ask if he can call me a cab.

He brings the bill, looks me over and tells me sternly I look good enough to drive.

I shake my head, grab my keys and stumble toward the door. But before leaving I turn around and ask one more question:

“Not if it’s a coastal elite,” Bart says. 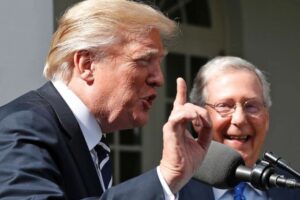