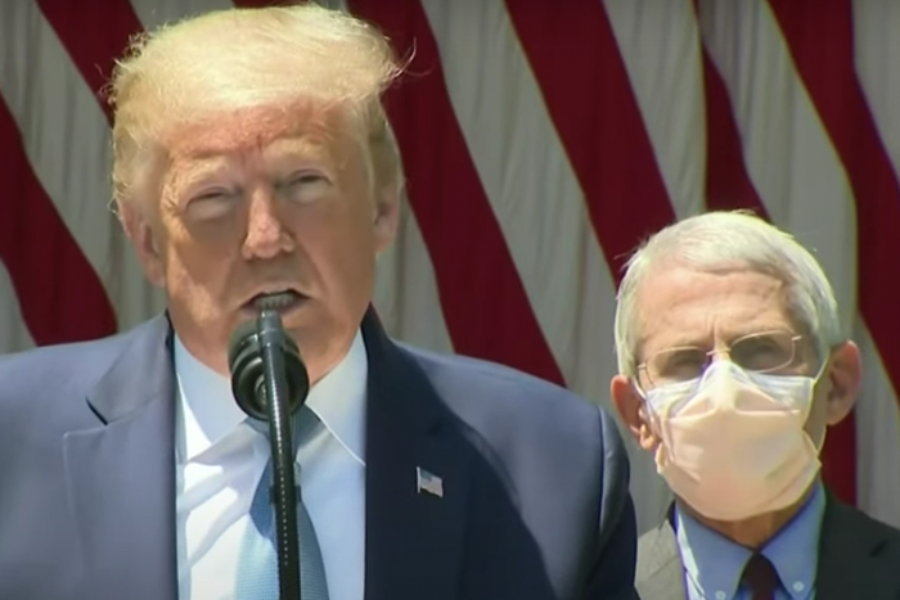 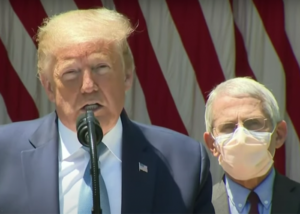 First, I just want to thank all the truckers who supported me yesterday during by terrific speech in Rose’s Garden where I warped up literally everything in regard to the China Virus.

The truckers, Truckers for Trump, as I call them, obviously agreed with my completely warped approach to holding the deaths down in America to well under a million, which would be an incredible, incredible success story. Frankly, nobody has ever taken a more warped approach than I have to anything, so you are welcome in advance for me taking you on this warped journey together.

I have actually announced a general will be the Warped Czar for this incredible, incredible venture. I can’t think of his name right now, but that doesn’t matter. What does is, he will be in charge of Anthony Fauci who continues to be a tremendous, tremendous disappointment to me. I was hoping he would quit by now, but for a little guy he is pretty stubborn. Most people would have quit by now but he’s hung in there. I kind of respect that, but not a lot.

Hopefully having a general bossing him around and warping him will knock some sense into him. He needs to get with the warped program already.

I am also a little bit sorry, not a lot, that I haven’t written you a Very Important Letter lately.

As you know, I have been busier than any other president in the history of this great country making sure it is great. I think you can plainly see it has never been better and greater than it is right now. After everybody gets done with their spring break, and people finally stop dying, they will all return to the malls and the golf courses and the movies and the ball games and my fabulous, tremendous rallies.

It will be like morning has come out in America. I love mornings. Except for the birds who are always chirping and getting in the way of my thoughts when I do things like write important letters. I have asked the EPA to make sure they kill as many birds as possible. You are welcome in advance.

And while the birds are dying, the economy will go right through the roof and nobody will be able to stop it. So for now, please be a little patient while the weakest among us die. It is not their fault they are weak, well, maybe it’s a little bit their fault but not a lot. Not a lot …

Anyway, I think now you can understand that I have been a little busy leading this spectacular and warped effort to cure us of the China Virus while liberating these poor, poor Americans who haven’t been able to take their guns out for a walk in public as much as they might like to.

This has been terribly, terribly unfair. America was founded on people being able to walk around with their guns and their flags whenever they want to. We are the land of the free and the home of the brave.

I must say, I am very proud of the Americans who I have seen out there walking around with their guns, especially in Wisconsin, Michigan and Pennsylvania. It is important you keep doing this, especially as we draw closer to the election. Even though all the polling has me leading Sleepy Joe by 20 or 30 points, it is important we keep all our options open in case Stacey Abrams and the awful Democrats try to steal the elections.

I have my eye on her. She’s very sneaky. Most of you probably don’t even know who she is, but that’s because she’s sneaky. I am told we have put together a spectacular website that just totally rips her to shreds and exposes her for what she is really up to. If you could have a look and then send as much money as possible, I would be as appreciative as I am capable of being. That’s generally not a lot but in this case, it will be a little bit more than that. So thank you.

I also want to touch on the IG I fired in the dark of night last night. I want to but I won’t. Suffice to say he is just another Obama flunky who hates me and was out to get my buddy Mike Pompeo. Mike’s a great guy, who would never hurt a fly. Well, maybe he would hurt a fly, but it doesn’t matter. He did nothing wrong and that will be the end of this story.

And speaking of Obama …

Before I start our very important meeting here in David’s Camp, I just want to say that what he is doing with these high school commemorations today is just absolutely disgusting. I say this as a guy who was the Valid Victorium of the military school I attended far, far, far away from home because my parents loved me so much.

Nobody ever got higher grades than I did and the speech I gave during graduation is still remembered as the greatest speech ever, ever given. The crowds were also completely fantastic.  Yuge.  Even though my parents didn’t attend because they had business that day shutting down an awful housing project in Brooklyn, the crowds still stretched for miles.

So now Obama is taken advantage of everybody being shut in their homes thanks to everything I’ve done, to talk to these kids, who frankly, are a little bit weak. I don’t like saying that, but the tough love will do them good. Just like it did me.

They need to get out of the house and back in the schools again.

How are they ever going to be able to grow up and walk around their towns with their guns, if they just sit at home and listen to Obama? And what does Obama know about anything?? I have it on good authority that he never graduated any school, and I have the proof. You will be seeing it any day now.

But right now, I have important meetings to attend where we will be talking about our warped approach to making sure America stays as great as possible.

So remember: Don’t listen to anything Obama says, and when you hear a trucker’s horn, think of me.

In his Important Letter Monday, Donald Trump defended his wife[...] 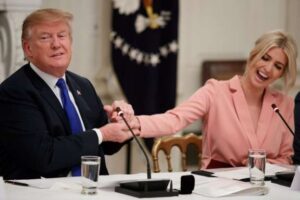