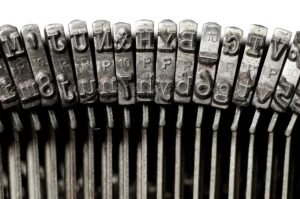 As the hours go by, and a nation’s idol reneges on one lie after another spun out on the endless campaign trail, Donald Trump does seem to be digging his tiny little feet into the one thing he actually feels passionately about: Donald Trump.
How can the boy so big and dear, make others see him in the same fawning, orange glow he so wants to see himself?
You manipulate the media, that’s how. Smart!
Remember John Miller? The Miller story caught fire for a minute or two back in May when a recording of Miller, er, Trump, surfaced in the Washington Post.  It seemed like just one more deliciously ludicrous thing that would add to the ceremonious sinking of the S.S. Trump.

Back in the ’90s, Trump, I mean, John Miller, would put on his PR cap, manipulate his voice and call the media elites in NYC trying to drum up all sorts of positive, scandalous  buzz for The Donald.

“Holy shit,” I think I said upon learning this.

Looking back, it might have been the truest thing about this phony.
Remember, Trump wakes up each day with one concern in his little life: Trump.

So as he sits in the golden tower wondering how in the hell he talked himself into this mess, and dealing with the fact that hundreds of millions of people around the world really do hate his stinkin’ guts, the least he can do is get back to manipulating the media.
It’s his only hope.
It worked marvelously through the Republican primaries when he tongue-lashed one hopeful after another in front of the bright lights and cameras, growing bolder and bolder by the second. Even better, he found there was plenty of venom to be mined across those, thar hills of Appalachia. Who needs coal when your very own orange idol is spewing grease?
So on he went. Bashing away. The KKK threw in, Putin, even Paul Ryan threw in, and then he threw out, but then got back in again before it was too late … Anyway, it got so good for The Donald he could just say the name ‘Hillary’ and his dark-hearted followers from Trump Country would rise as one and chant, “Lock her up! Lock her up!” I mean what could make a raging misogynist’s day more than that?! Yee-haw!

Actually … One thing could.

Battering a media who wasn’t on message.

Screw manipulation. Yes, battering would be better. Much better. So he did. Relentlessly. He pointed the media out at his rallies. He called them out by name — came up with clever little insults that really got the Trumpettes in a tizzy.

Sure, others running for the nation’s highest office have done a little of this, maybe all. Obama hasn’t been a close friend of the media. He’s mostly taken the high road to politely work around it. But Trump? You kidding? No, Trump would dig into this one. He owned a Twitter account, a microphone and the best words.

He got one thing wrong, though. A very important thing: There is a difference between the media and the working press. You can bet Obama understood this.

The media these days are easy to spot because they are everywhere. They are very much like Trump in this way. Look at me! Look at me!

They press work away in the background, digging … asking … adjusting their glasses … verifying … asking again … digging. Reporting. The people in the working press most likely got into print because they didn’t like the media, either. They definitely didn’t trust power.

I think Trump knows they’re out there, even if he can’t quite spot them. Picking out the press person in a crowded room is like trying to spot the one brown leaf through the forest.

The working press is going to end all this for The Donald. This I think he knows, too.

On Tuesday, when he rolled out of bed and got to thinking about himself, The Donald took to Twitter to announce he was canceling his visit to the ‘failing’ N.Y. Times. Maybe he had that dream where it all ends. Whatever, he knew in his evil gut, that visiting the Times was a bad idea.

Until he changed his mind a couple of hours later. There was time yet to get back to manipulation.
They say most criminals want to get caught. So The Donald showed up at the offices of the Grey Lady knowing all those skeletons in his three-story closet desperately needed some air. If only he could let them out and get back to being John Miller again, when everything could be about him and not some stinking country.
The press can help. 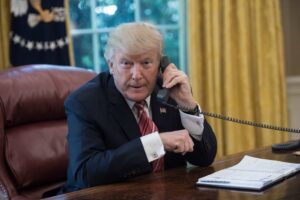 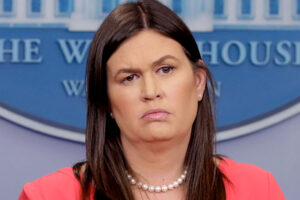 I also want to say right here and right now I will not be firing Kellyanne for hatching any acts. It's her job to hatch acts!! She hatches things all the time around here and most of them are very clever. 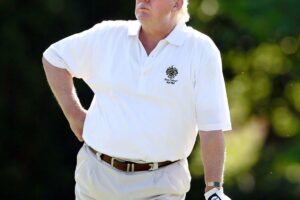