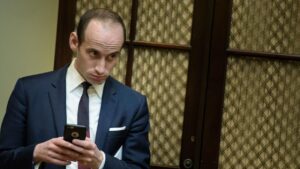 In his Important Weekly Letter Sunday, Donald Trump announced that Stephen Miller (pictured) will be heading up his new CRAP Initiative to silence the press.

Because this country has never been in better shape, I have decided to release my Important Weekly Letter on this crisp Christian Sunday morning before I reward myself with a little golf, because as you know I deserve it. I also want to leek a few details of my plan to make sure that the lying, stinking, disgusting, fake media is put out of business in this great country of ours. As you know, they have done enough damage, and have no rights to be in this country anymore. I’m sure you’ll agree with that also. And thank you for agreeing with me. That’s very important.

Don’t the lying media have other things to do than cover me? Used to be, when I was the most respected, successful, sexy businessman in the world, I could beat ’em with a stick and still not get a word from ’em. Now? They never shut up. Nev-er. I am sure after they read this important letter they’ll be yimming and yammering all over the place. “Trump said this! Trump said that!” Well, this will end — believe me.

You need to know what is going on from me and nobody else, folks. The other way only confuses the process and makes it impossible for me to do what I want without interference from the lying, fake, awful, terrifically disgusting media.

As you know, I’m not really a fan of the Nazis, even though the media lies and lies and says I am. I want to say, though, there were some good people on the Nazi side no doubt about it. I mean, besides my father, Fred.

I do wish they hadn’t killed so many people, though. That was probably unnecessary. They were also rotten tacticians. I just watched that movie “Dumbkirk.” At least that’s what I call it, folks! Boy, the Nazis really blew that one, eh? Proves they weren’t as great as many people think they were. One thing Hitler did that I absolutely agree with, though, is put the awful, stinking, out of hand, probing, crybaby media in their places.

When Hitler put Reismeister Gerbils in charge of the news it made it a lot easier for him to get things done. And, yes, I know that isn’t how he spelled his name, but it is easier for real, red-blooded Americans if I type how the name sounds when you say it. Anyway, Gerbils was able to tell people what Hitler was doing and then he just did them without interference of the fake, stupid, disgusting media. It must have been a beautiful thing to be able to operate that way. So I am going to start operating in that beautiful way. Again, I’m not saying all the things Hitler did were great, just some of them. I can’t wait to see how the lying, awful, stupid media reports this. “Trump says everything the Nazis did were great!” I can here it now … Just watch. Watch … Dopes …

So that everything I do and say is accurately reported from this point forward, I will be appointing Stephen Miller Editor and Chief of Completely Real Administration Propaganda (CRAP) immediately. As you know Stephen has had a short but extinguished career serving me. He’s really a very smart kid. My real kids are actually a little jealous of him, but not too jealous. Just a little. I don’t blame them. Even our little one … er … what’s his name, looks up to Stephen. Though he is getting taller. Not as tall as me, but taller. He’ll never be as tall as me, but his hands are pretty big, which has me worried … Anyway, enough about Stephen and what’s his name. I know he will do a great job as Editor and Chief. I am very proud of him. I’m sure he is proud of himself. If not, I want him to be. Stephen, be proud of yourself.

And so you know, this is a job I wanted Steve Bannon to take, but he said he could do a lot more damage on the outside. I’m still not sure what he meant by that. He is always talking in weird code. But I like the things he is doing since he left me. Plus, things are a lot tidier since he’s been gone. No more grease on the golden Oval Office furniture. Sorry, Steve, it’s true. Your skin kind of leaks.

And speaking of grease, before I end this Important Letter and continue to set the record straight, I want you to know that, Rex did not call me a blankity-blank moron. This was another story the lying, stinking, to-bit, snidely media fornicated. I am sick and tired of this folks. Nobody would call me a moron. Why would they do that? Right, because they wouldn’t. I gave Rex a great job and he loves me for it. He can boss any country around that he likes. The only thing he can’t do is start wars. That is my job. So Rex will stay on the job as long as I want him to, which right now is a very long time. Got it, lying media??

So I look forward to launching this CRAP initiative immediately. I think for now on things will go much more smoothly and you’ll see real progress in my continued to efforts to make America great again.

Have a good Christian Sunday and remember to think about all the great things I did to make the people in Pueeeeeeerto Rico and Las Vegas feel great about what happened to them.

Who is having a better time than Donald Trump these[...]

Trump’s most dangerous trait of all

You don’t need to be told what a revolting pig[...] 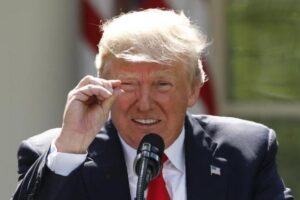 Come to think of it, I am even more proportionate than Abraham Lincoln, who let's face it, folks, was a little over-proportionate when he sent Sherman tanks into Atlanta after the Civil War to burn it to the ground. That was not proportionate, OK? Sorry, Abe, just calling it like I see it.