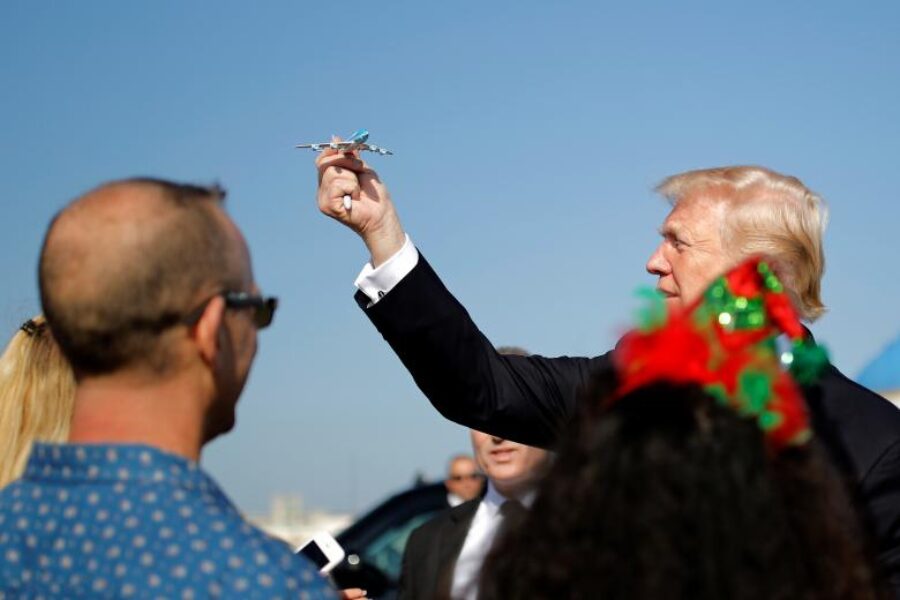 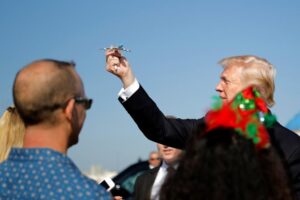 After writing his Very Important Letter, President Donald Trump plays with his favorite Christmas present while his fawning supporters look on in amazement.  REUTERS/Carlos Barria

Dear American Loyalists to Me!

First, I just want to thank everybody for reading my Very Important Letters to you this year. It has meant a lot to me, and I am sure even more to you. It is very important you understand where I am coming from so you can understand where you are coming from when you run around explaining to people all the great and terrific things I have done for you and the rest of America and the entire world during this historic presidency.

As you no, the year started with the most gigantic, massive, incredible inauguration ever. Sean told me at the time over seven million people showed up to cheer me on as I resuscitated the Declaration of Independence at the mall. In fact, a day later there were even more people at the mall than the first day to keep cheering me on. And not surprisingly they were mostly women, who as you know can’t seem to get enough of me, or malls. I literally have to bat them away sometimes. Just before writing this Very Important Letter, Kellyanne was hovering around my spectacular office here at the Winter White House and giving me the eye. She gives me the eye all the time, but I don’t make eye contact. I just close my eyes and hope she is gone when I open them. But she is always still here. Kellyanne is not my type, folks, but I guess she would do in a pinch. OK, I’m kidding. She would never do in any pinch …

My father, Fred, used to say to me all the time, “Donny, there’s not a women out there who deserves somebody like you.” Well, as you can imagine that always meant a lot to me.

But to be serious, I want you to know that I am not done making America great again. Sure it’s much greater than when Obama was running things into the ground, but that’s not saying much. It’s a miracle he did not start a war with Rocket Man in North Korea. Thanks to me things are much quieter there now and you almost never here about it. I mean Rex says things about it, but he sometimes doesn’t know what he’s talking about and I have to say other things just to make sure everybody understands that the terrific  things I am trying to say are more important and terrific than the things he is trying to say, and that just creates massive, incredibly massive confusion that nobody can quite understand are trying to be done. I hope that this at least clears things up for now as far as all this goes until next year.

The economy has also rallied from the depression we were in thanks to Obama. As you know he tried to take all the jobs away in the south and give them back to the north because he was still mad about slavery, which I’m still not sure really happened, folks. But I’m not here to judge.

But no matter, as you no, I don’t hold any grudges and really don’t care who I can shove into a good-paying job in a coal mine. I admit I haven’t shoved as many people back in the coal mines as I would like to but that’s only because the lying, stinking, awful fake media keeps telling everybody there are no jobs in the coal mines and we don’t need any coal anymore. This a very, very bad lie. The worst. We need a lot more coal and a lot more jobs. What we need less of is the lying, stinking, awful, decrepit, terrifically stupid, selfish media and I plan to do something about this next year. Just wait. I will be releasing plans on that very, very soon.

I have also heard enough about Russia and will be closing down that investigation just as soon as they put Crooked Hillary in jail. I’m certain she did conspire with Russia to blow up Uranus just to put money in her federation’s bloated pockets. I have told Trey Gowdy and Mike Pence to keep pushing this investigation until it bares a lot of terrific fruit.

I am also not sure why Mike Flynn has tried to hurt me so. I have always been supportive of him and can’t believe he actually was ever a general. As you know, as a war hero, I love the military and especially the generals. Had I known General Flynn was crooked like Hillary I would have never made him the head of the Security Exchange Commission. Of course Obama never said a word to me about General Flynn. He just bugged my offices and left town, so I kept General Flynn around. Now he is trying to stab me in the back like Bruno did to Juliet Cesar and it is hurting my feelings incredibly. He’ll never get away with it, though. I am much smarter than Cesar ever was, folks, believe me.

I also want to say you are welcome for you thanking me for taking Obamacare away. Your welcome. This wasn’t easy, but I kept on pushing this legislation and now I hope healthcare will be harder to get than ever before. Not everybody needs healthcare, just like not everybody needs two or three houses. Only some people. That is the beauty of American and why President Franklin was so strong in his belief that its OK people are poor. If everybody were rich how would I get any enjoyment? The only one I’ve talked to who really gets this is Putin. He’s a smart cookie, folks. I know not everybody likes him like they like me, but they should. I mean not as much as me, but kind of close. He’s a good man, and is treated very, very not good. I think history will show he is one of the greatest leaders the world has ever known, but I wouldn’t expect you to understand that because you don’t know what I know, and I already know that, so thank you again.

Well, because this is a working vacation I have spent a lot of time writing you this year ending Very Important Letter. Oh sure, I could have been out on the golf course like Obama always was, but no, instead I was sitting here writing you this incredibly, incredibly important letter. It just who I am, folks. Maybe I’ll duck in a round of golf later, but I doubt it.

I just hope in the year ahead most of you will be able to get rid of your healthcare and start working in a coal mine. This would make me very, very happy. And speaking of happy, Happy New Year! 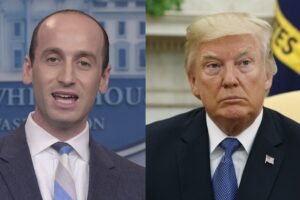 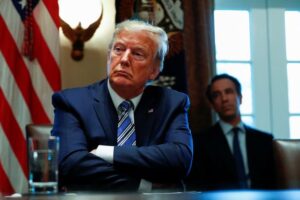 Before They Die, Trump Hopes Old People Will Scream at Kids to Vote For Him

With lives literally on the line, Donald Trump has been displaying a dynamic brand of leadership never before seen literally anywhere -- ever. I mean, EVER.