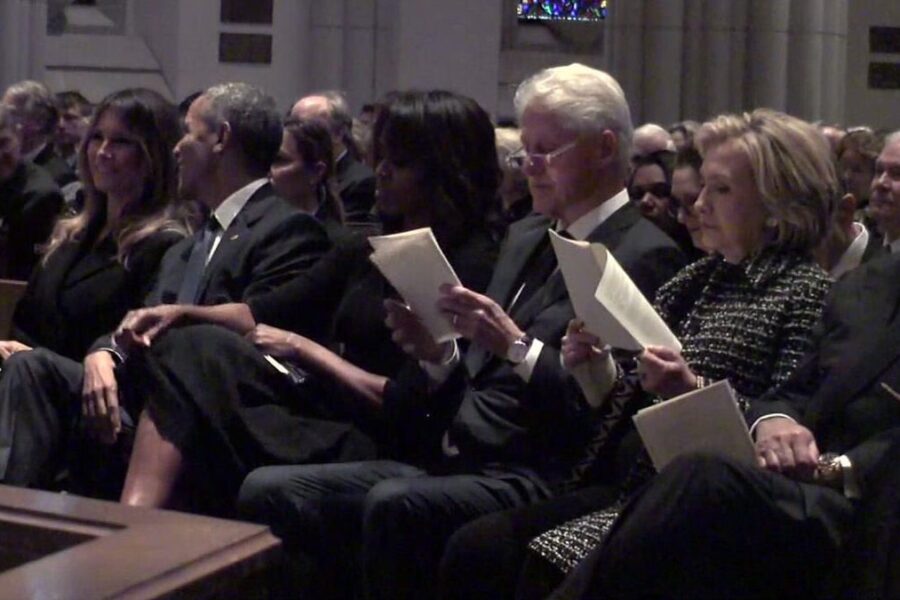 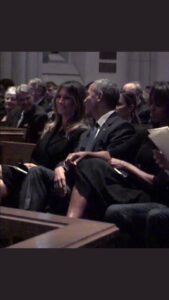 While Donald Trump stayed behind, putting the nation first and writing passages for our times, a miserable Melania Trump attended the Bush funeral and suffered through the time away from her powerful, loving husband.

‘MURICA: Saturday will long be remembered as the day the great Donald Trump finally became presidential. While former presidents, world leaders and august dignitaries from all parts of the globe were in attendance for former first lady Barbara Bush’s funeral, Trump was alone in cavernously deep thought hammering away at a statement for the ages.

While anybody who mattered in the Bush Family’s high-above orbit softly landed at  St. Martin’s Episcopal Church on the grounds of the George H.W. Bush Presidential Library at Texas A&M University in College Station, Donald Trump was guiding his rocket-fueled golf cart through the golden-encased and oh-so-garish Mar-a-Lago compound lashing together sterling passages of Jeffersonian prose which will no doubt stand alone in the history of this great republic.

While President Obama lent color and a powerful ounce of perspective to the Bush gathering and provided a sturdy shoulder for Melania Trump to giggle on, her single-minded husband was fighting though tricky tee times, battling a wicked slice and an alleged balky remote control to put words into his nuclear-powered cell phone which would stand the test of time, and make presidents and leaders before him quake in their laughably inadequacy.

As the sun rose and set above and around his head in that oh-so-special, sun-drenched Florida place hard on the Atlantic, Donald Trump spent Saturday showing he not only possessed presidential timber, but indeed was the massive, dense hardwood tree from which such timbre didn’t stack up.

Never before has a world leader written with such unbending bravado — citing “flunkies” and “witch hunts” … “MAGAs” and “R.s” … “Sylvester Stallone” and “Mr. McGoo” … “disgusting news” and “third-rate” reporters …

These are the powerful words in the order Trump crafted them that are changing the world. Without anymore delay, we present the president’s Saturday statement as it emerged in front of our misty eyes:

The New York Times and a third rate reporter named Maggie Haberman, known as a Crooked H flunkie who I don’t speak to and have nothing to do with, are going out of their way to destroy Michael Cohen and his relationship with me in the hope that he will “flip.” They use……..non-existent “sources” and a drunk/drugged up loser who hates Michael, a fine person with a wonderful family. Michael is a businessman for his own account/lawyer who I have always liked & respected. Most people will flip if the Government lets them out of trouble, even if……..it means lying or making up stories. Sorry, I don’t see Michael doing that despite the horrible Witch Hunt and the dishonest media!

Today, my thoughts and prayers are with the entire Bush family. In memory of First Lady Barbara Bush, there is a remembrance display located at her portrait in the Center Hall of the @WhiteHouse.

Heading to the Southern White House to watch the Funeral Service of Barbara Bush. First Lady Melania has arrived in Houston to pay our respects. Will be a beautiful day!

So funny, the Democrats have sued the Republicans for Winning. Now he R’s counter and force them to turn over a treasure trove of material, including Servers and Emails!

Sylvester Stallone called me with the story of heavyweight boxing champion Jack Johnson. His trials and tribulations were great, his life complex and controversial. Others have looked at this over the years, most thought it would be done, but yes, I am considering a Full Pardon!

James Comey’s Memos are Classified, I did not Declassify them. They belong to our Government! Therefore, he broke the law! Additionally, he totally made up many of the things he said I said, and he is already a proven liar and leaker. Where are Memos on Clinton, Lynch & others?

The Washington Post said I refer to Jeff Sessions as “Mr. Magoo” and Rod Rosenstein as “Mr. Peepers.” This is “according to people with whom the president has spoken.” There are no such people and don’t know these characters…just more Fake & Disgusting News to create ill will!

You can see by his smile, how little the Russia[...] 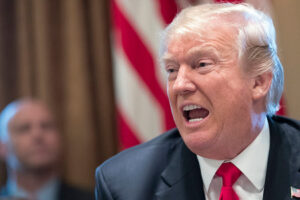 With his poll numbers falling, Donald Trump took aim at Republicans who are not standing with him and the KKK while he attacks America's enemies ... 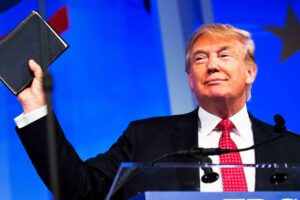