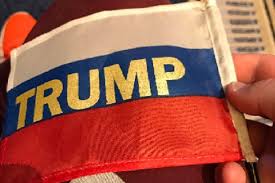 I suppose I could quit right here, and declare victory by pointing out that among the million or so things Donald Trump doesn’t know is the definition of irony. This is the guy who built his phony kingdom upon a creaky pile of bullshit, lawsuits, and alternative facts. Making things up is literally the only thing he is good at.

I know, I know, you are understandably skeptical given the residual panic and personal injury resulting from November’s blistering, orange mushroom cloud. But wipe the smoke from your eyes, because it is becoming sky-blue clear that in his lying, cheating heart, Trump is anti-American in thought and deed.

The naivety and audacity of America’s slow march toward inclusion and tolerance is a decided, wholly innocent, strength. To scheming, unread piranhas like Trump they are seen as weaknesses to be exploited. The more we hear his incessant groaning the more we know this. The more he tears pages from the Constitution to fuel his fast-dying fire, the more his partisans see it through stinging, bloodshot eyes. Yes, even they are getting there, right Darrell Issa?

Or should I say, they are returning. Wasn’t a year ago, most of ’em wanted no part of this anti-American huckster and his ugly bowel, er, birther movement.

What they couldn’t see — what most of us couldn’t see — was that Trump was going to be the wrong guy at the right time. The Left had self-important things to do like stand on principle with one foot, while kicking themselves with the other. Let somebody else take out the other side’s trash. Their wise president anxiously, but graciously, stood off to the side, broke a sweat and worriedly counseled voters, “Don’t boo, vote.” Were there ever three more cautionary words than those, given what ended up happening on Nov. 8?

The Right was desperate, but oh so determined, and if a smug, women-hating, narcissistic Russian sympathizer could land enough of those jarring hay-makers, well … who’d be with her then, eh?

Then there was the media that couldn’t take its eyes off the real-time train wreck (speaking of irony … let that itchy rash set in for a minute) and challengers fell one after another under the withering assault from the automatic insult machine: “Lyin’ Ted” “Little Marco” “Look at THAT face Carly” “Wrong-gene Rand” “Low-energy Jeb ” and so on … and on … and on …

I mean who can resist Jeffersonian prose like that? The Republican establishment had their man, but knew damn well it would be only a matter of time before they’d be forced to admit they’d actually been had. They just didn’t think it would be only a month into the Orange  Reign before their umbrellas came up and reinvention would need to begin in earnest.

Harrumphing his way onto the mushy pallet of red, white and blue Russian flags and white-hot heat of an ever-shrinking club of true believers, Trump addressed Friday’s gruesome chapter of the Conservative Political Action Conference (CPAC). Hulking, brooding and emanating unrivaled love for himself, Trump began lying while emptying his bag of greatest hit jobs from the campaign trail.

I mean, of course he did. We know by now, Trump never strays far from the beloved campaign trail because he has no idea where he is going.

Battering and bashing his way through heartless renditions of the “The Wall” and the oh-so-popular, hate-filled chorus of “Lock Her Up,” Trump once again saved his best words for the media. Yes, THAT media – the one who only a year earlier had helped lift him up on the creaky political mantle and in plain, awful view of everybody.

At Comrade Bannon’s urging, Trump again snorted that the working press  “was the enemy of the American people.” Only a day earlier Bannon had poked truth in the eye by warning this battle was only beginning.

Unlike Trump, Bannon has read a book or two and knows full well the  ominous bullshit his puppet is peddling is a more bitter-tasting campaign trail mix — a wicked concoction of Nazi Germany and Russian Lenin. Bannon knows it is the tried-and-true baby formula of history’s fascists. The CPACs swallowed it whole. The election of Trump proved they’ll eat literally anything.

Now Bannon’s betting you’ll eat it, too, if he serves enough of it.

Truth is, Americans want no part of this dangerous drivel. Real Americans know a free press is vital to who they are and what We stand for. It doesn’t mean they always like the press necessarily. In fact, they don’t. Hell, not everybody likes cops, either, but let’s try to go a day without ’em. Actually, let’s not.

The press watches power, and holds it into account 24/7, while we’re busy doing American stuff, which is pretty much whatever it is we damn well want to do. The press will be there and there and there, so you don’t have to be.

Real Americans haven’t really given this a lot of thought in the last few decades. Complacency, partisanship, and fast food by the ton have doused our intellectual fire.

Now that’s changing and our Fourth Estate is finally once again being fortified. People know the truth will ultimately set us free, and that it’s the working press that will provide it. And all because some tin-pot wannabe dictator is betting against it and America.

Can’t wait till Trump gets around to discovering the definition of irony.