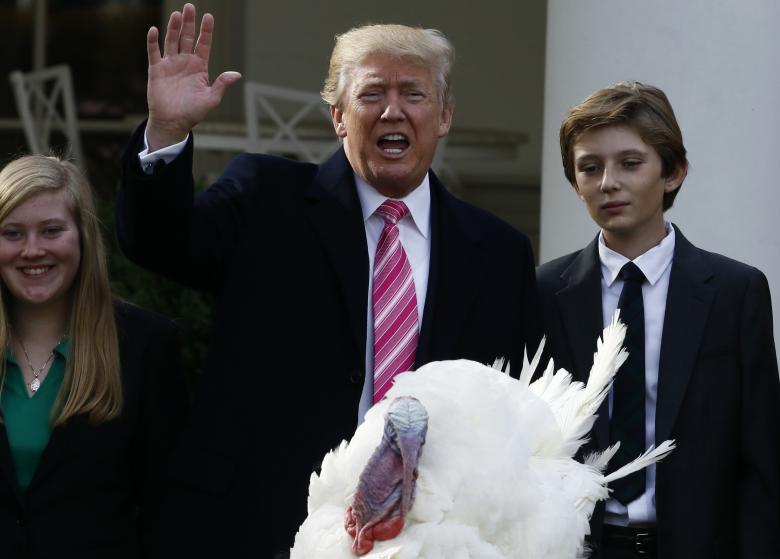 Before I tell you everything you should be thankful for in this thoughtful, important Thanksgiving message that I have taken the time to tailor for you before heading out for a well deserved round of golf on my fabulous property hear in Florida,  I just wanted to let you know some of the things I am thankful for.

Yes, even somebody like me who already has everything and doesn’t even need to thank anybody for anything, because he has everything already will give thanks anyway. That is pretty incredible when you think about it, folks. So I suggest you do.

Like me, I hope you are in one of your terrific vacation homes today enjoying all the football and gorging on all kinds of tremendous food that people are cooking and serving for you. There’s nothing better than sitting around and eating platters of food people deliver to you. And please remember to thank those people. It’s not their fault that they are serving you food. OK, well, maybe it’s a little bit their fault, but not that much. Not that much …

If you are very, very lucky you also have family around like I do. I am so happy Ivanka is here — so, so happy. So happy … She looks so beautiful, folks … <sigh> … so beautiful … <sigh> Anyway, then there’s Donny Jr. and Eric, and Jared and, um … well, um … The other two or three kids, um, er … never mind. They know who they are. And they know I cherish them better than any father can cherish something. It reminds me of the Thanksgivings growing up in our little 46-room mansion in New York City.

My father, Fred, would gather us all around the golden, 126-foot-long table and then just glare at me and say, “Donny, if you can keep yer big yap shut for the rest of the meal, you get to pick out the kind of pie you want for dessert.” Well, as you can imagine, that meant a lot to me.

And how about the job I did pardoning those turkeys, eh? I thought what’s his name — um, the little one with the sad eyes — did a terrific job helping me with the pardoning, didn’t you, folks? He just stood there off to the side being quiet and staring straight ahead with his mother while I did the greatest pardoning job of any president in history. I don’t know if you saw it, but I actually touched one of the turkeys and he didn’t even bite me. I’m still amazed by that. Believe it or not I had never touched a turkey before.

Anyway, this is why I also pardoned Roy Moore right after I pardoned the turkeys. Turns out, I am a natural when it comes to pardoning. And, anyway, he deserved it.  He’s been treated so, so unfairly by these lying women. I mean 40 years ago?! 40 years ago?! Really?! I know the feeling, believe me, folks. And where are the statues of limitation to commemorate these things?! I bet they were torn down, too. See what I mean, folks? All this political correctness is getting in the way of making America great again. Poor Roy. Poor, poor Roy. I bet he’s giving thanks to me right now.

Many, many, many people have told me that they hope I do a lot more pardoning in the near future. We’ll see. We’ll see. That’s all I am going to say about it right now. But back to Thanksgiving …

I’m not sure Columbus knew what he was onto when he discovered this great country and celebrated on that so very long ago Thursday in 1792 with the Indians in the cornfield. Now all these years later, here we are thanking each other and eating all this good food people cook for us, while we watch football. Sure, it was a little tougher back then, because they didn’t have fancy ovens and TV sets, but at least they also didn’t have the lying, stinking, fake, awful media around to ruin their meals. And Pocahontas was a real, shapely blonde dish, folks, not some old, crinkly politician from Massachusetts. OK, that’s a joke, folks! A Thanksgiving joke! I’ve been saving that one up for this important occasion. I wrote it on the plane ride to The Overseas. I know you enjoyed it and are thanking me for it right now.

And speaking of Pocahontas, can you imagine how miserable crooked Hillary’s Thanksgiving is today? Just another stupid, loser woman who doesn’t even understand how to play the woman card. Think about that. I played the woman card better than she did. Sad!

This is another thing I am thankful for, that she is stuck somewhere with her lousy, awful family playing cards while I am here writing this important Thanksgiving Letter before heading out to the golf course. Losers shouldn’t get to enjoy Thanksgiving like I do. They should just sit around and cry all day, and be thankful I haven’t thrown them in jail yet — like those stupid, idiotic, lowlife basketball players from the ghetto who I single-handedly rescued from China. They should be thankful they aren’t in some Chinese sweatshop making clothes for Ivanka’s collection like other anti-Americans. They make me furious. How am I supposed to enjoy my Thanksgiving at my vacation home with my family and all these platters of food, when they are out there not thanking me for rescuing them from China? Think about how unfair that is to me.

No president has ever rescued basketball players from China. But do you think the lying, stinking, disgusting, pathetic, fake media has reported that?! Do you?!!! No, they just write about stupid things that don’t matter to anybody like the tax plan, Rex’s failing State Department and Puerto Rico whining about not having any power yet. Boo-hoo. You don’t like living there? Leave! But don’t come here because we don’t want you, OK?

On this joyous occasion I also want to be thankful that Ty Cobb told me last night that the Russia probe is over and crooked Hilary did in fact sell titanium to Russia. I knew she did this all along. I told everybody this during the campaign. I am glad this whole Russia probe is finally over, even though I know Vlad rightfully is not happy about it. I will probably have to pardon him too someday, but not today. Not today.

Today we celebrate family, football and huge platters of food. Enjoy yourselves today, folks. Your welcome.